2.The main factors affecting the formation of subcutaneous stomata include:

(2) the higher the sulfur content in Molten Iron, the easier it is to cause subcutaneous blowhole. The higher the sulfur content, the more dangerous the situation. This is because, in addition to the hydrogen-induced subcutaneous pores, the defects may be aggravated by H2S gas. After spheroidizing, oxide and sulfide (including MgS) slag will be produced. If the slag is not cleaned, MgS will flow into the mold cavity with the molten iron, the MgS floating up to the metal-mold interface reacts with water and gas at the interface H2s gas produced by the reaction also formed subcutaneous pores.

(4) When mold moisture is more than 5%, the subsurface blowhole is natural to appear in the wet ductile iron castings. H2 and H2s gas are produced by the chemical reaction between the liquid iron and the water on the mold surface. When the casting solidifies rapidly, it can not float up, so it stays on the surface near the casting surface and forms subcutaneous blowhole.

(5) the hygroscopicity of charge with water, spheroidizer, and inoculant and the increase of hydrogen content in molten iron will lead to more subcutaneous pores.

(9) The influence of three factors is more dangerous. At present, there is no systematic and exact theoretical basis for the mechanism of the effect of sulfur on the subcutaneous blowholes of wet-type Ductile Iron Castings. Still, it is an indisputable fact that the subcutaneous blowholes are quickly produced when the sulfur content of molten iron is high, the reason is that more sulfide inclusions (MNS, FeS, MES, etc.) are easily formed in the high-sulfur liquid iron, which causes the slag to form subcutaneous pores. In addition, oxide slags (such as Feo, MnO, Alo, Sio) are formed during smelting and treatment, the oxide slag formed by the reaction of liquid iron with water on the surface of molding sand may become the substrate of gas nucleation, the adsorbed gas molecules aggregate into bubbles, and the amount of residual magnesium in liquid iron is too high, the more oxides and sulfides produced by magnesium in the process of desulphurization and Deoxidation, the more the subcutaneous blowhole of ductile iron will increase sharply, and the higher the pouring temperature will be, the more the subcutaneous blowhole can be effectively prevented, the less inclusion, the reason is: On the one hand, the oxidation reaction is not easy to carry out at high temperature; on the other hand, the inclusion is easy to rise and remove at high temperature. 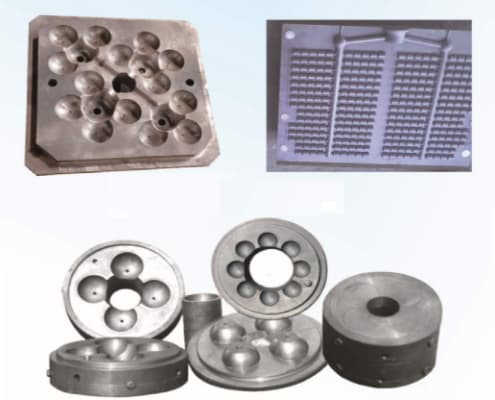